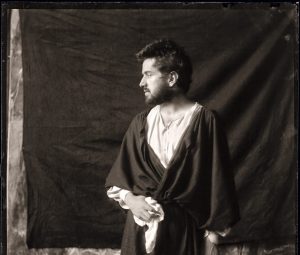 Mariano Fortuny y Madrazo was born in Granada in 1871 from the celebrated Catalan painter Mariano Fortuny y Marsal (1838-1874) who died when his son was 3 years old only. His second last name Madrazo was that of his maternal grandfather & great grandfather both of whom were painters Federico (1815-1894) and José (1781-1859), who was a pupil of Jacques-Louis David.
After his father died in Rome Mariano and his family moved to Paris where he spent his childhood and early youth.  He studied at the Académie des Beaux-Arts coming first in his year in scenography and painting, thus continuing the long tradition of artists in his family.

With his grandfather and uncles’ support Mariano was introduced in the French capital to art in general and performing arts in particular. In Paris, Fortuny became part of the intellectual and artistic circles, many of whom were enthusiatic supporters of Wagner’s ideas which played a major part in Mariano’s later development. He met the Spanish artist Rogelio de Eguquiza, a close friend of Wagner who painted many works based on Wagnerian themes and was important in propagating  Wagner’s aesthetic throughout Europe. Mariano, a man of eclectic interests immersed himself totally in fin de siecle culture, taking to heart Wagner’s idea of the ‘total art work’.  Wagner’s influence can be seen in a series of paintings based on the Ring Cycle that demonstrate his taste for the romantic, decadent and the visionary. Wagner ‘poetics’ inspired many philosophers & artists – including Schopenhauer and Nietzsche – casting a huge shadow over the visual arts at the end of 19th and 20th centuries. 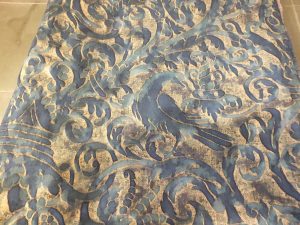 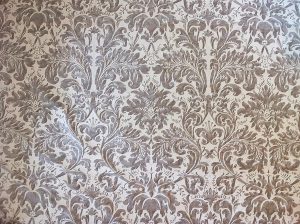 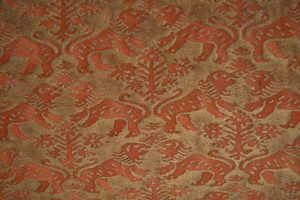 In Paris Mariano was informally tutored by August Rodin although his artistic tendencies were drawn by the new technical innovations that could already be seen in Paris like electric lightening.  In 1883 the new Eden theater was inaugurated to house spectacular dance shows like the ‘Excelsior’ and the ‘Sieba’ that involved hundreds of people among actors, musicians, dancers and singers, with the largest stage ever seen and state of the art lightening system. This was the occasion for the adolescent Mariano to trigger his future professional interest in the best use of electricity on stage lighting and theater interior design.

In  1891, aged 18, Mariano Fortuny visited Bayreuth to see the innovative theatre built by Wagner:  the orchestra pit was introduced in France in 1784 to optimise the acoustic effects but it was only after the construction of the Festspielhaus in Bayreuth  that it became a key feature of all future musical experiences. Hiding the orchestra in a pit was vital to the geat German composer because the audience could  focus solely on the drama providing thus an unobstructed field of vision onto the stage and a better diffusion of music sound. Wagner insisted that the audience sit in near total darkness a contrast to the opera of his days which was often a social occasion for the public to be seen in society.  As minor a detail as it may seem today, it was revolutionary to Wagner’s audience. This event will strengthen Mariano’s interest in creating the perfect theater scene setting as we’ll see.

In 1889 before that trip Mariano settled in Venice with his family in palazzo Martinengo  in Dorsoduro not too far away from the local Accademia of fine arts where he continued his studies in painting and etching while pursuing also his interest in music, theater and photography. The Venetian palazzo where he lived with his family became a meeting place for artists and intellectuals such as Henry de Reigner, Marcel  Proust and Paul Morand. Mariano was then exposed to a very stimulant  intellectual ambiance. Above all Mariano lived in Venice his early days as an artist during the founding years of the first Biennale opened in 1895 a fertile ground for his future career. He won his first prize in 1896 and in the next year he will be awarded as Honor Academic by the Venice Accademia. 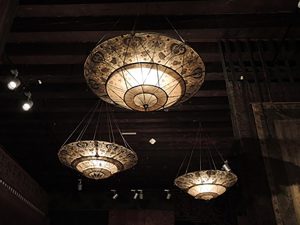 In 1900 Mariano achieved a widespread celibrity when he was appointed to create costumes, scenario and lighting for the opera Tristan and Isolde directed by Arturo Toscanini at La Scala in Milan. For the first time he introduced an indirect illumination system for theatre stages based on light reflection starting then a successful career in lighting systems.  In this field his most notable contribution was the so called ‘Fortuny Cupola’ a retractable semi-cupola to encompass the entire stage permitting projection through filters to create a more poetic and convincing rendering of atmosphere such as night, dawn & dusk and endless light effects. In 1906 to meet the large demand of the Cupola Mariano associated with Aeg to produce and commercialize it throughout Europe as more theaters were adopting the new lighting system. In 1922 the cupola system was defenetely adopted by La Scala in Milan. Furhtermore Mariano also got a patent for a method for constructing inflatable walls for theatre.  The theatrical activities which had made him famous throughout Europe were curtailed by the outbreak of the Great War.

At Palazzo Pesaro, Fortuny’s home and workshop you can see:

– the model for the Bayreuth theatre made by Foruny in 1903, which adapted to the new lighting technologies made possible through the creation of the Fortuny cupola – giving greater artistic scope for effects from indirect & diffuse light.  (dimensions: height 240cm, width 210 cm, depth 170 cm)

– the model for the Teatro delle Feste (1912) – which was a collaboration with the Italian poet Gabriele D’Annunzio and the architect Lucien Hesse for a theatre on the Esplanade des Invalides in Paris and inspired by Palladio’s Teatro Olimpico (& Greek theatres).  It was to be financed by the Baron Maurice de Rothschild and Senator Deutche de la Meurthe and the impresario Schrmann.

In those fervent years Mariano also engaged in fashion and fabric design and producing.

He developed his interest in fabrics from the rich collection of his parents and he found an outlet for his creativity in the early 20th century creating his own range of distinctive fabrics with his wife Enriette Negrin through an original process of printing on silk and velvet.  His decorative work was inspired by Catalan, Venetian and Byzantine traditions  but also by William Morris and the Arts & Crafts movement. 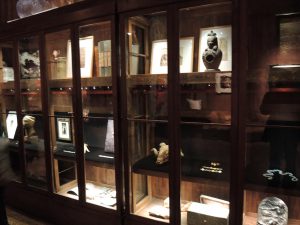 A visit to Greece in 1906, and his discovery of a number of antique fabrics which sparked his curiosity, motivating him to work on classical techniques of dying and printing onto tissues which led to his celebrated Delphos gowns which were successful in Europe. The name ‘Delphos’ was inspired a Charioteer in the Louvre. His first success in 1907 was a fine plisse shawl made of muselina called Knossos produced at first in 15 types all hand made in silk and other fabrics. Two years later he introduced a full female plisse long dress based on the classic Jonic tunic Kiton made of silk and printed with natural colors

Fortuny opened showrooms in Paris, London, Madrid, Zurich and New York.  His fame led to Marcel Proust frequently mentioning him in his work ‘In Remembrance of Lost Time’, Proust being a passionate admirer of Fortuny’s clothes and fabrics. Proust a friend of the Fortuny family from the time they lived in Paris, visited palazzo Pisani degli Orfei on a number of occasions, being a great lover of Venice.

Fortuny worked for Sarah Bernhardt and for the dancer Isadora Duncan his clothes heralding a new era of greater freedom of movement for women at a time when rigid, uncomfortable corsets were the norm.  Mariano’s clothes liberated & wrapped the female body like a second skin, the light silk and velvet showing each curve in simple, clean designs which had little ornamentaion beyond Murano beading. 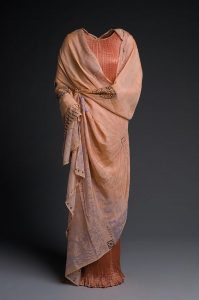 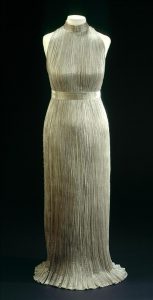 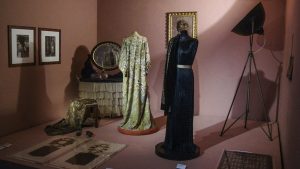 Fortuny clothes designs were ahead of his times, despite being inspired by antiquity. Inimitable and exotic they seem to be inspired by aspects of the Renaissance aesthetic, Coptic liturgical vestments, decorative motifs of the Kufis & the Chinese and arabesques of Islamic art.

In 1919 Mariano opened a new factory in the Giudecca island producing cotton and printed fabrics according to his design and produced with his own machinery still active nowadays.

He produced bespoke fabric dyes by hand through using historical techniques and searching out natural pigments from 4 continents (such as carmine from Mexico, high quality silk from Japan). Fortuny avidly guarded his secret techniques, using up to 10 different dyeing processes to obtain a single colour.  The craft was the creative act for Fortuny.  In 1909 he took out a patent for a machine that pleated silk.

Mariano is now a very well known world celebrity and his life will be marked by an exeptional number of artistic and business succeccesses until his death in Venice in 1949.

After the funeral his body was brought to Rome and buried in the Verano city’s cemetery in his family tomb. In 1956 his French wife Henriette Negrin donated the palace and all existing collections to the city of Venice being now a museum and a place for exhibits.

A visit to palazzo Pisani is a way of entering into Fortuny’s life & passing through his times, discerning the presence of the earlier generations of Wagner, William Morris, Ruskin and many other key figures.  He retraced their passions, placing himself in the heart of the culture and tradition of Venice they helped shape.  The Fortuny is a connoisseurs museum – the more you know, the more you see.  But it is more than that, being an ideal way for anyone interested in entering that world and finding out more.
Fortuny was an artist who was a master of technical innovation, renewing the science of theatre production, creating lights and reflectors.  He brought his experimental creativity to photography, leaving 12,000 images on glass plates and film.  Despite being a contemporary of the giants of avant-gurde of the early 20th century Duchamp, Picasso, Braque, Brancusi , Chagal,  Kandinsky, Klee he belonged to a different, parallel universe which represented the Belle Epoque, of the privileged society which died with the Great War.  The year of Fortuny’s death was the year Peggy Guggenheim took up residence at the palazzo Venier dei Leoni bringing her great collection of avant-garde art  to Venice.

The Fortuny runs temporary exhibitions dedicated to fashion and contemporary art which include clothes by Roberto Capucci, John Galliano and Karl Lagerfeld.  These provide a juxtaposition between Fortuny’s furnishing and art collection.  Axel Vervoordt has curated and added a number of other contemporary art works.

Our tour about Fortuny

About the Fortuny palace

Link to the museum