If you will be visiting Venice there is one place in the very center of town at 10 minutes away from St. Mark’s square that is worth your attention. It is the most beautiful outdoor staircase ever built and once you have reached the top be ready to enjoy one of the greatest views of Venice’s skyline.

Its full name in Italian is  scala Contarini ‘del bovolo’, in English the Contarini ‘snail’ staircase due to its peculiar spiral shape.

Very little is known about the origins of the palazzo to which the staircase belongs and its earlier owners. Examining the architectural style we may say that it goes back to the second half of the 14th century at the time of the doge Andrea Contarini in office between 1368 and 1382 when he died. And it is possible that the present palazzo was rebuilt at the time of the doge Andrea.

Even if the palazzo is grand and imposing it faces an inner and smaller canal not a good location to enhance such a great architecture. If it had overlooked the Grand Canal the façade would have been much more visible showing the wealth and social position of its owners in the best possible way. The main façade of the palace facing the canal and its main water gate entrance was concealed and hard to see. Therefore there was an attempt to beautify the land entrance at least decorating it with a fresco painting until the decision of building a magnificent staircase was made.

There aren’t any documents that inform us with certitude about the architect who built the staircase although tradition has attributed the work to Giovanni Candi. In a city like Venice where maximizing space was important twisting model for a staircase was not new although these were indoor staircase and far from being so much decorated as the Contarini’s.

Not knowing exactly when the staircase was built we have to rely as a starting point on the bird’s eye view map of the year 1500  produced by Jacopo de Barbari where it is already shown, therefore it must have been finished before that year.

Considering that Venetian patrician families of the past used mostly the water gate of their palaces as the main entrance and used gondolas to move around, we can assume then that the staircase is more like a huge work of sculpture with the goal of beautifying the palace. The final goal of the staircase was to stress the fame and wealth of the family more than for its practical use and as a matter of fact it became the most known and famous in Venice and it was named after its owners, the Contarini family. The nickname ‘bovolo’ or snail was added later by the commoners because the spiral shape of the staircase.

It looks like the project must have been very expensive considering the materials that were used, besides the filling parts in brick the inner structure was made of Istrian stone of the best quality. And also the skill of the architect and stonemasons had a big part in the expense because of the fine fretwork cutting of the staircase and its height taller than most of the buildings of the city.

The tower is 26 meters high (77 feet) with a diameter of 4.70 meters (15,41 feet) made of a central round pilaster from which 80 steps depart all made of a single piece. The summit of the staircase consists of an open loggia made of round renaissance arches that provide an almost 300° breathtaking view on the rooftops of Venice, a true must for any visitor. See the pictures down below.

To further increase the verticality perspective of the staircase viewed from the bottom the height of the arches in each one of three intermediate levels decreases, the last ones being the half of the first ones. To allow the view of the staircase from the street in 1873 the surrounding wall was pulled down and the perimeter encompassed with the present iron railing.

The staircase was previously restored in the 80’s thanks to the contribution of Minnesota Chapter of World’s Monument Found. The present restauration was founded by the IRE (Venice Education and Asylum Institutes) that once had its main offices in the palazzo Contarini and concluded in June 2016. 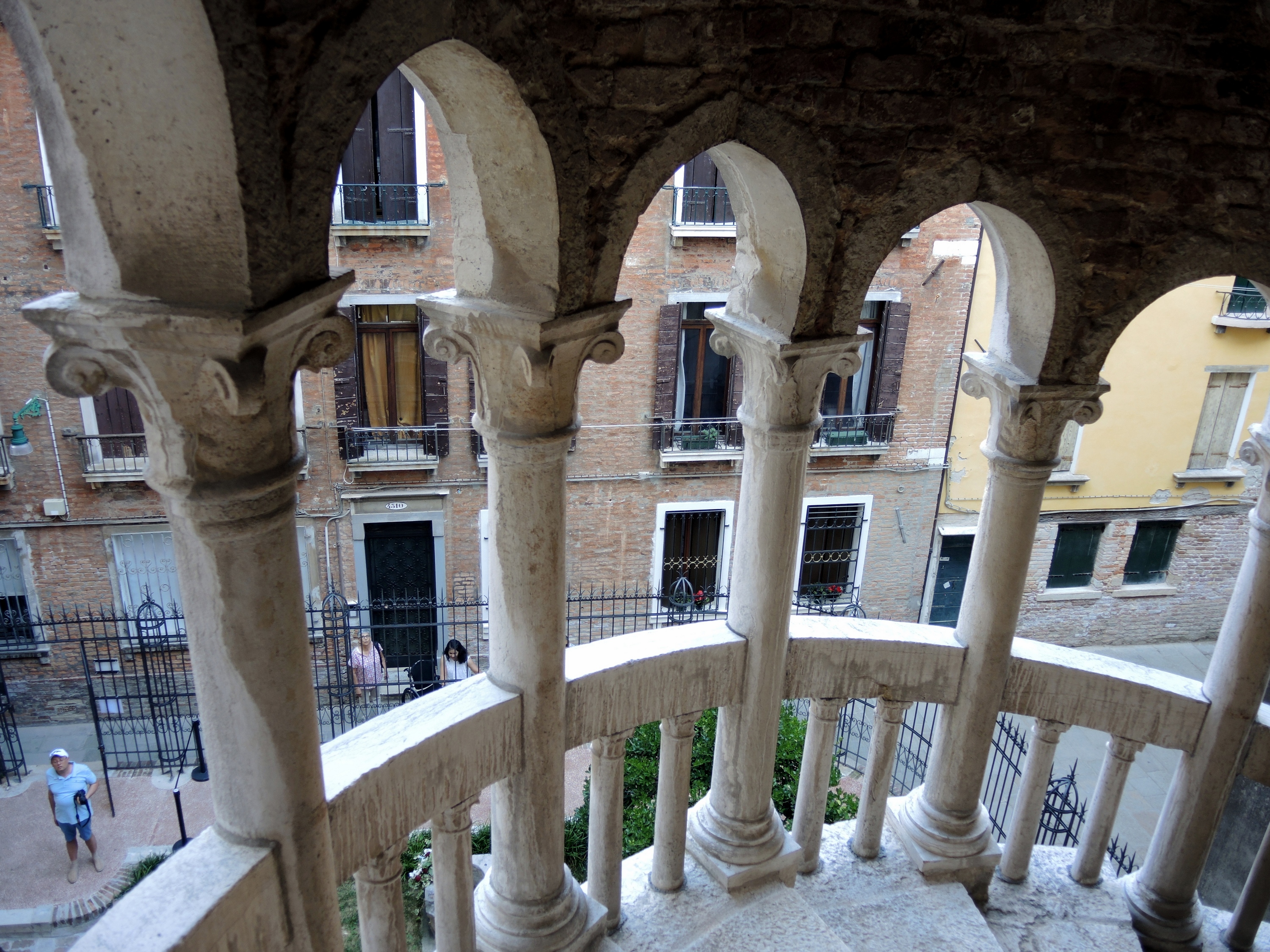 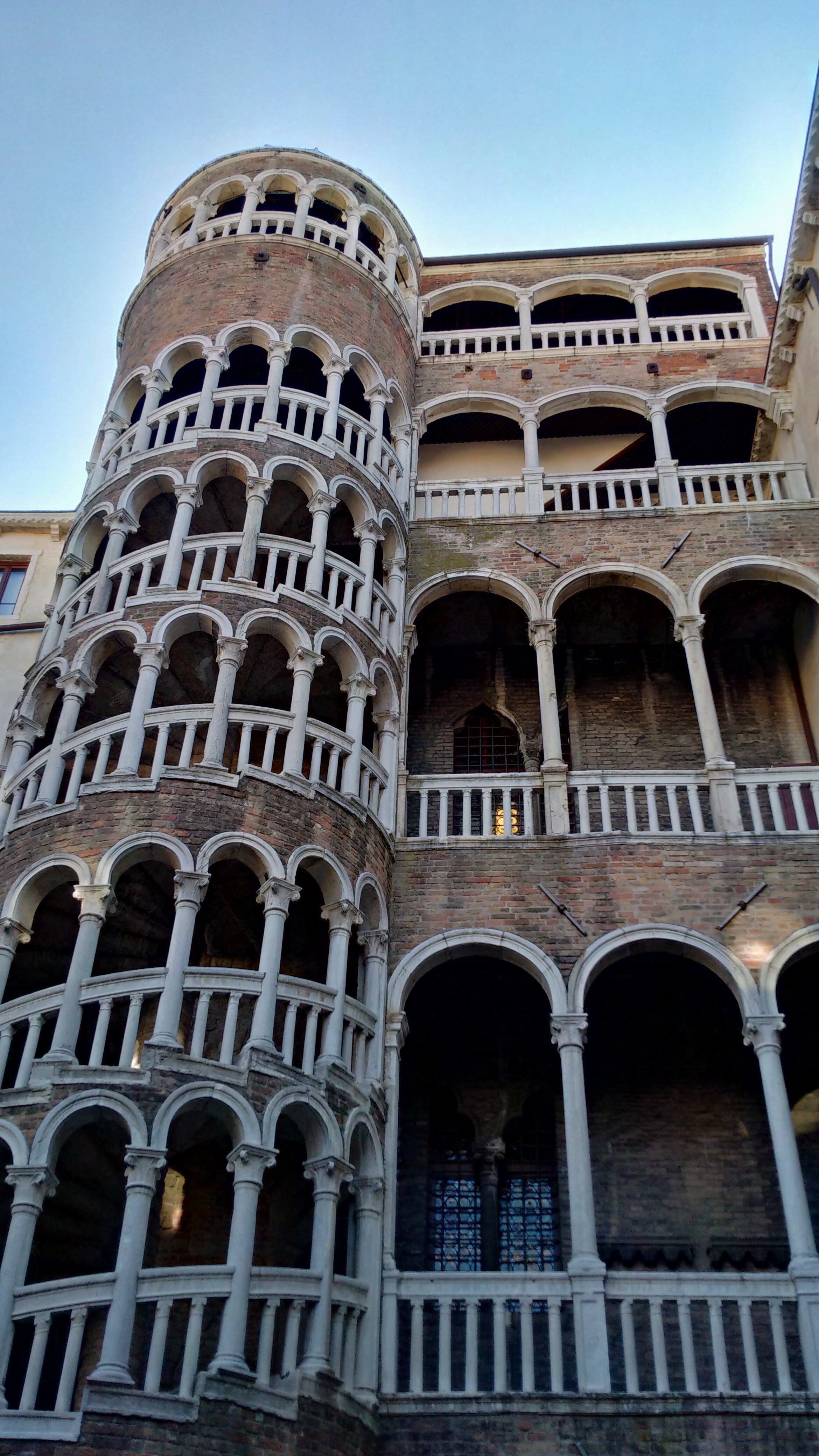 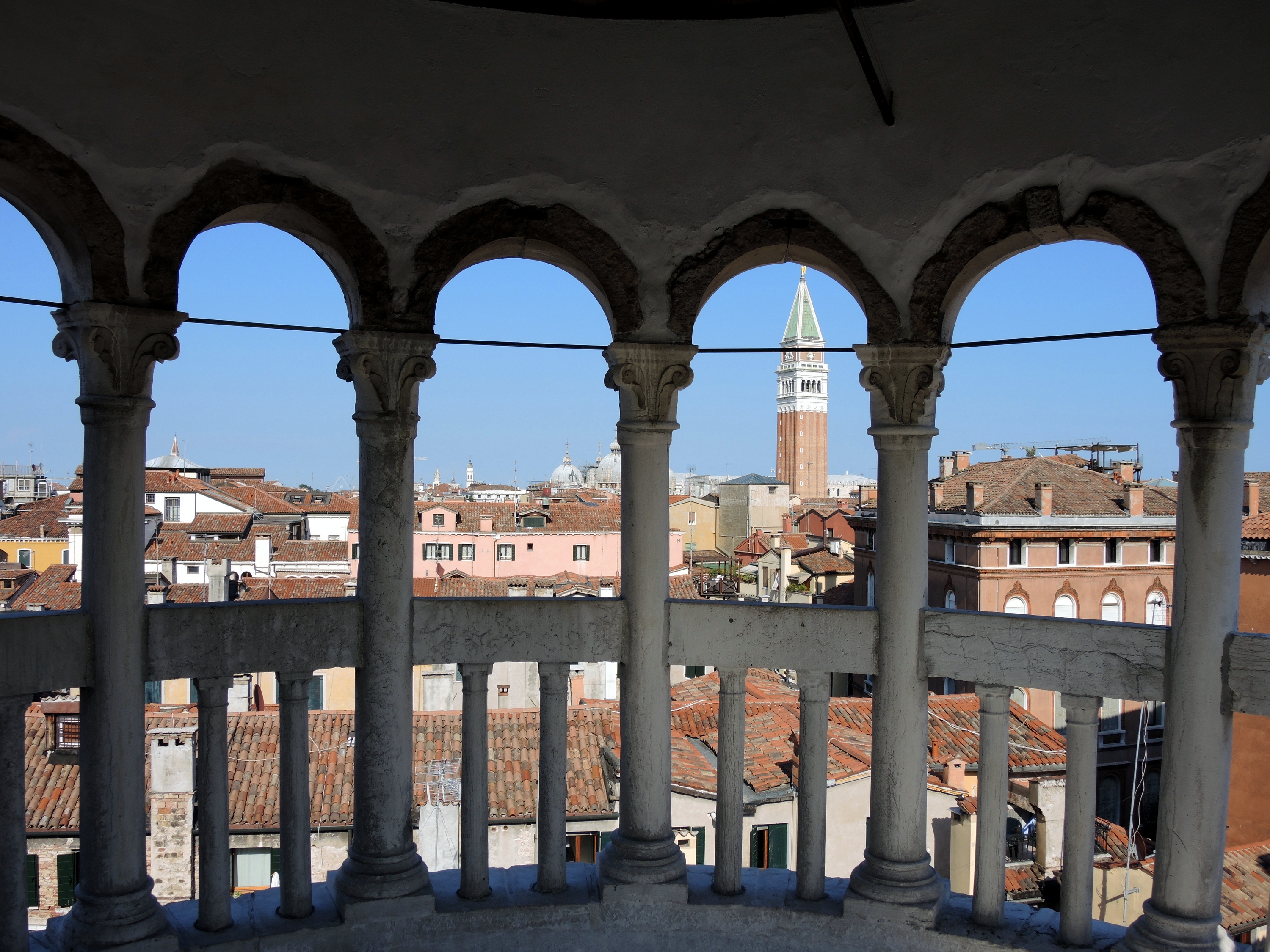 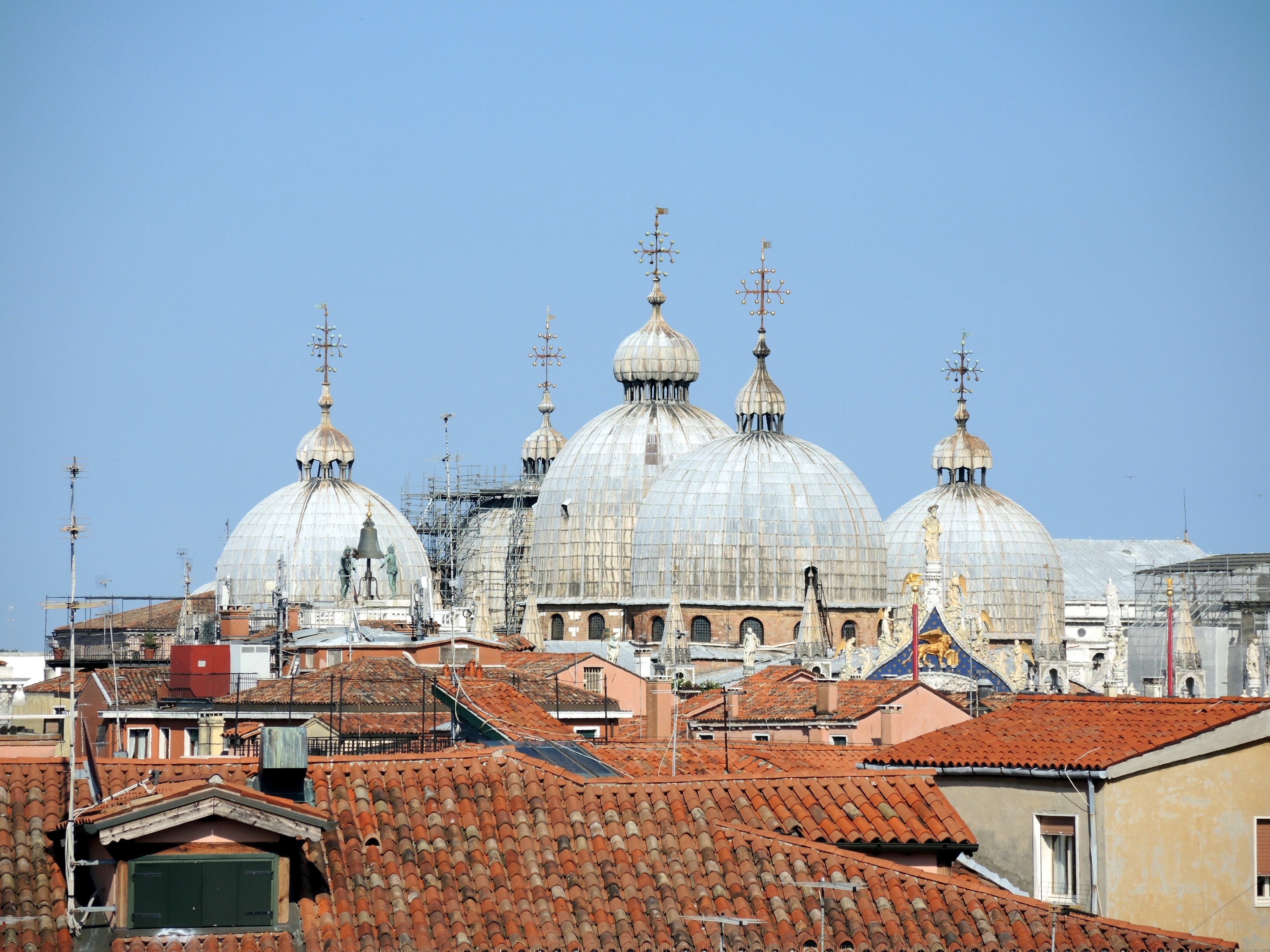 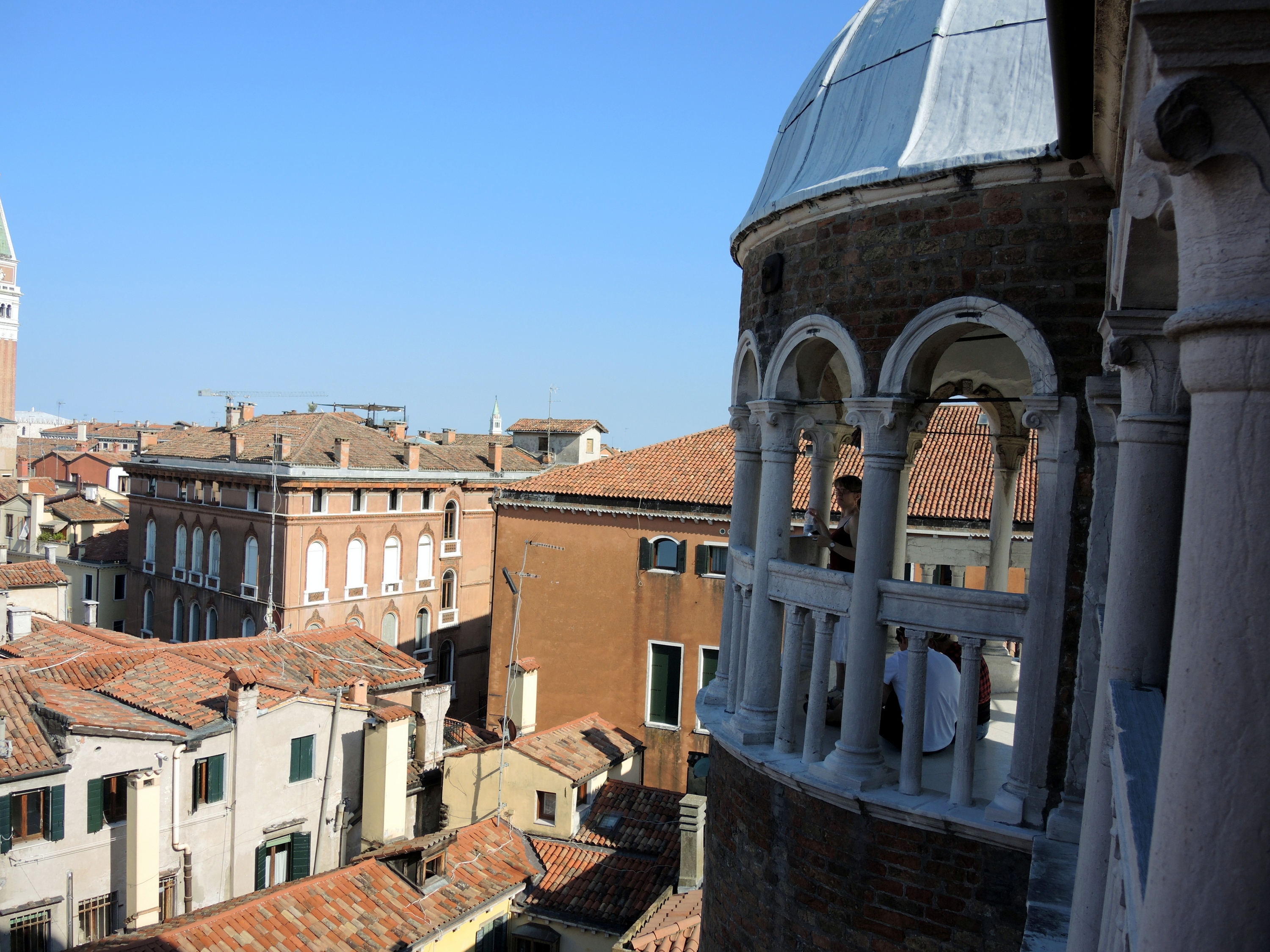 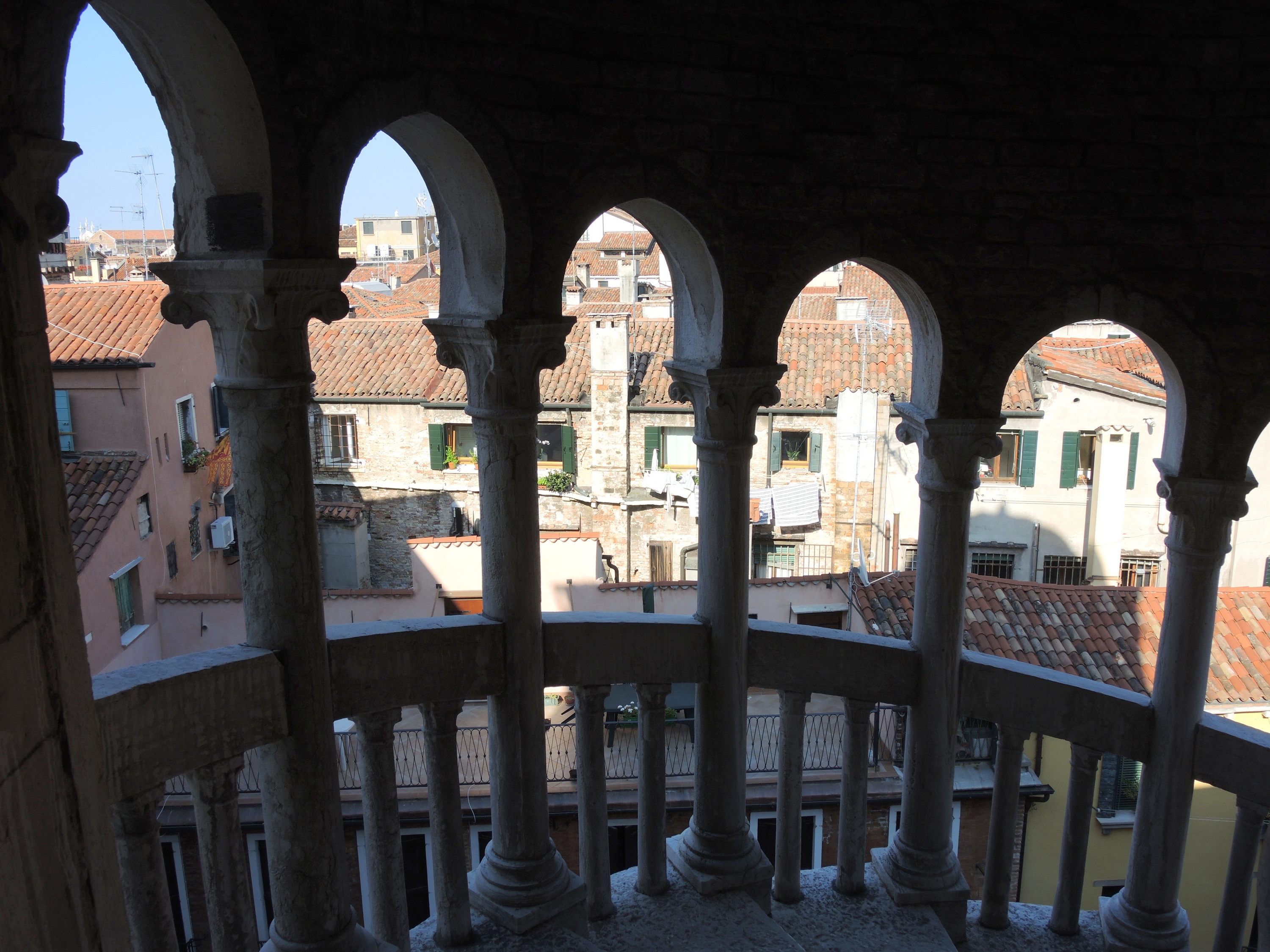 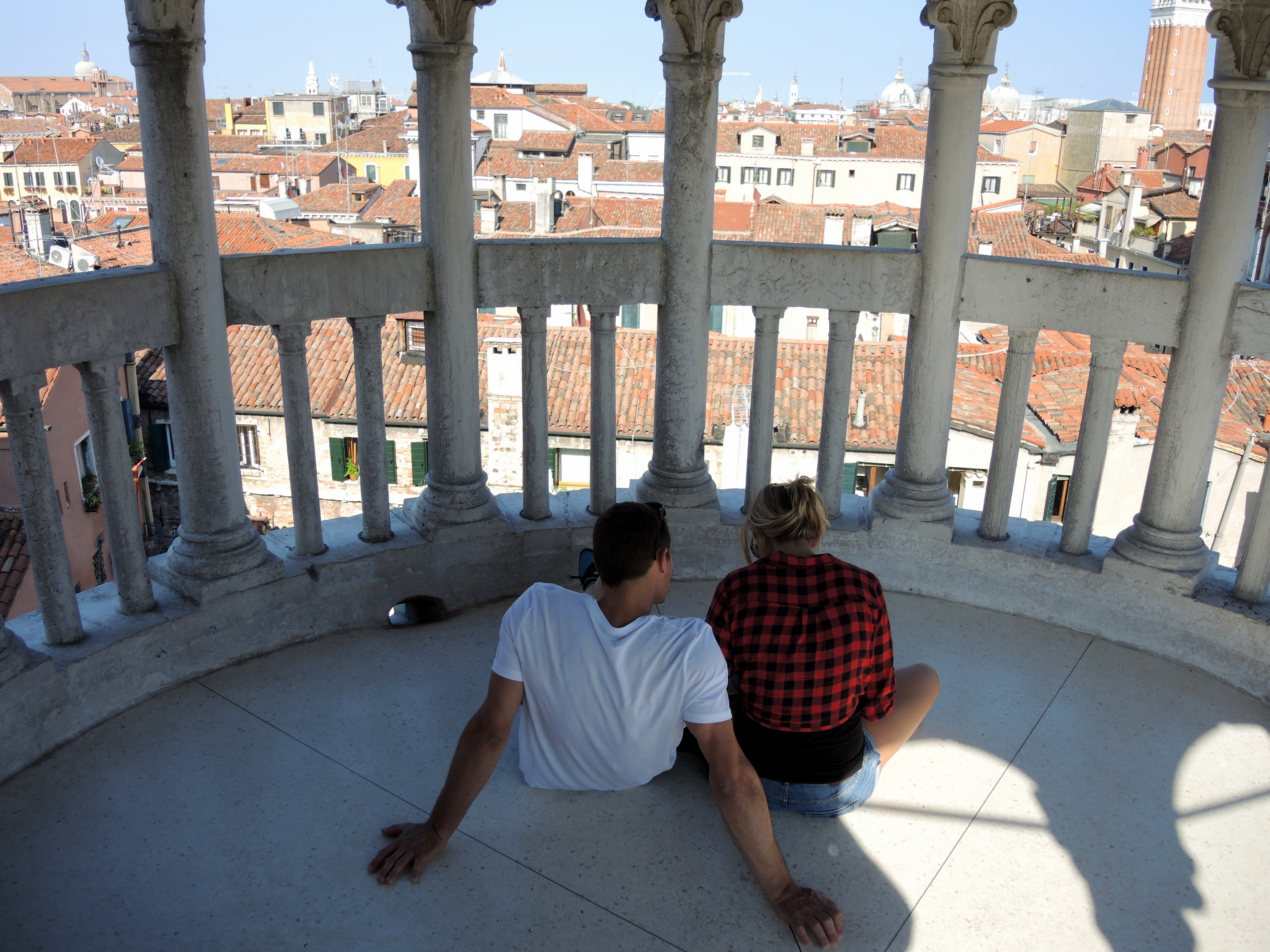 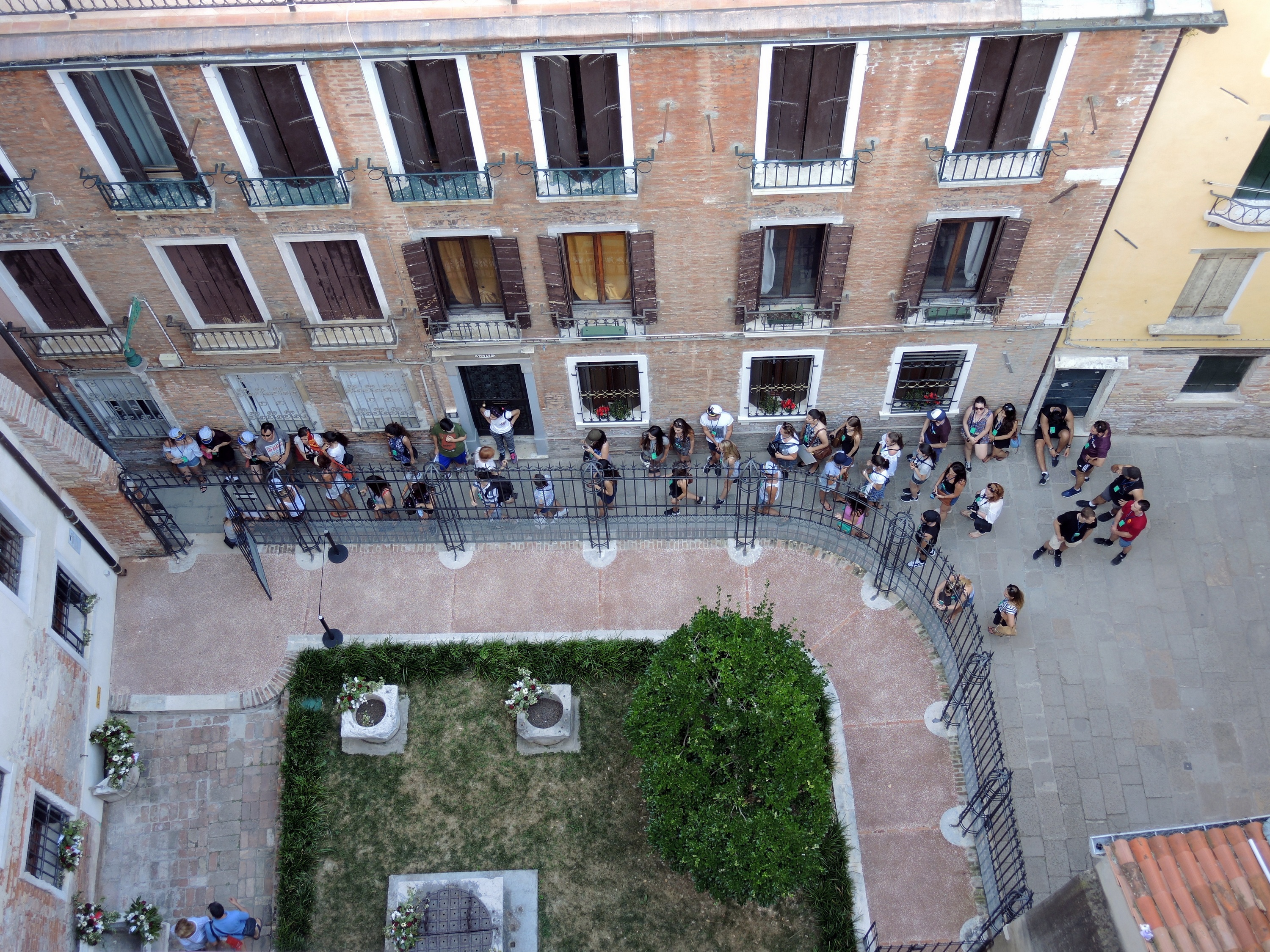