In 1348 the Black Plague had arrived in Venice spreading very quiclky through the urban population weakend by the famine of the previous year which led to the arrival of large numbers of starving people from the mainland looking for food in town further increasing the diffusion of the plague.
The main human vehicle of the terrible desease called peste from the latin ‘peius’ or ‘the worse’, were the Genoese soldiers after they had left their base of Caffa, present Feodosiia in Crimea. The Mongols were besieging the Westerners and to undermine their resistance they had catapulted infected corpses inside their camp making this event an early example of bacteriological warfare. In the very end the Genoese forced the blockade with twelve boats escaping from Caffa but in every port where they arrived, they will spark the plague around. After reaching Costantinople, Messina, Pisa and finally Genoa the main epidemic was definitely triggered spreading through the continent at a furious pace and killing one third of the European population extimated then at about 75 million people. 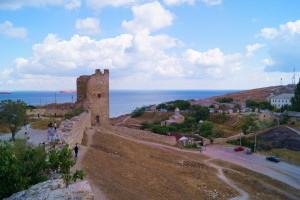 Even if not reaching again the intensity of the 1348 epidemic, still the outbreaks of plague will hit Venice very often during the Middle Ages at an alarming rate when finally in 1423, at the time of another pandemy a bold decision was taken by the Senate. To build a hospital of at least 20 rooms outside the city to host all those affected by plague in Venice and the nearby islands plus anyone showing the symptoms of the desease on board of Venetian ships arriving in town. The chosen location was the small island of Santa Maria di Nazareth seat of a religious congregation since 1249 and located near one of the main channels connecting the open ocean to the lagoon. Soon the people started to call the place the Nazaretum to became later Lazzaretto or Lazaret a name that will be later widespread in Europe to define a quarantine station. 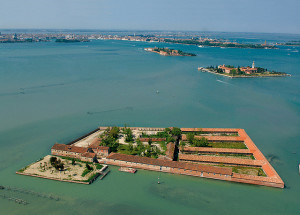 Although in such a place every one thought of being infected was brought in without distinction from proven cases of plague and suspect ones. To enforce the compulsory confinement the Health Magistracy introduced severe penalties ranging from fines to mutilations and capital executions.
That first station proved to be unsifficient to host a multitude at the time of epidemics of large extent but above all Venetians started to differentiate the stages of the disease and the way to treat it. So it was necessary to create a new place where to bring those who were suspect of being infected and keep them there for a number of days to see if they were sick or not and act accordingly.

The New Lazzaretto came into being in 1468, a place to seclude anyone arriving into town from ports and cities already hit by plague and being potentially infected where to stay for at least 40 days. After that term if a person wouldn’t show any signs of sickness he will be admitted into the city otherwise he would have brought to the Old Lazaret a place where to die in total seclution.
For the site of the first modern quarantine station in history the Venetian authorities picked the island called then Vigna Murata owned by the Benedictine monks of San Giorgio Maggiore to be known later as the Lazzaretto Nuovo or New Lazaret. 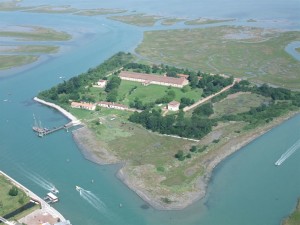 The new station was built to host people, animals and goods after all was downloaded from the ships before they could reach Venice. Merchandise was kept in a large shelter open on two sides to let the air flow in and ‘disperse’ the miasmas, even more several products have to be properly purged : silk to be exposed to open air two times a day – blankets washed and boiled – books to turn every page and parfume it – short hair animals, washed and keep them free in their precinct – velvets, carpets, furs, tapestries, to be covered in sand.

The porters had to store goods keeping track of vital information as kind of goods, arrival date and owner. There were 200 rooms for the people and stables where animals were kept. The space inside the island was divided in sections all separated from each other to grant the insulation of each group of new comers from the ones that were already in place.
A local doctor will examine any person showing signs of the plague and to avoid any contact he weared a mask with a long beak full of herbs and scents as a filter to avoid breathing the miasmas . 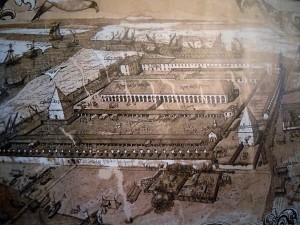 He had glasses and gloves and not to get too close to the patient he used a long stick. There were porters in charge of downloading all goods and providing food to the guests in a bag latched to a long stick over a wall.

Guests will pay for the food with coins in a cup full of vinegard as product thought to avoid the spread of the disease. All the life of the Lazzaretto was directed by a general manager called Priore appointed by the Health Magistracy and in charge for four years. He had to keep track of all arrivals including people and goods and their provenance besides keeping all the keys needed to close all gates from sunset to sunrise. And also hurrying up burial procedures that required bodies being covered by lime. 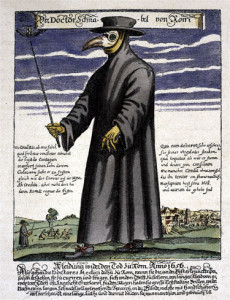 ding to Francesco Sansovino, son of the great architect Jacopo, during the terrible pandemy of plague of 1576 to accomodate the large number of people kept in quarantine some 3000 vessels were marooned all around the Lazzaretto island hosting a total of 8000 to 10000 people. All procedures were very well organized, food was delivered, juniper wood was burnt all around to ‘disperse’ the miasmas, health officers intervened promptly in any new clear case of plague to transport the patient to the Old Lazzaretto.
The last great epidemic of plague will hit Venice in 1630 but the disease will never show up again in the city contrary to other cities, in 1656 the plague shows in Naples and Genoa, 1720 in Marseilles and in 1743 in Messina.

Venetians used a very effective prevention system against the diffusion of the plague using the so called ‘patent of health’ or health declaration. To access any Venetian port in the Mediterranean with their ship all captains have to show their declaration papers issued by a Venetian authority in the port of provenance declaring the vessel was free from any contagious desease. Even more captains were asked to collect all what they heard during their voyage regarding any cases of plagues and provide a full report to the next health officer at any port of arrival. And all the retreived information will be later being delivered to Venice seat of the main Health Office. 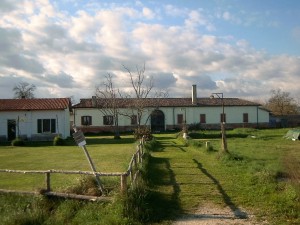 s we can see it was a very well organized information system to deter any possible case of plague of reaching Venetian ports.

Venice besides creating the first quarantine station is also known for introducing the first Health Office in Europe. It was established in 1486 and run by three officers in charge for one year extended to 16 months in 1745 but in case of an epidemic two more officers were added. In 1524 a Surgeon General was appointed, he was a medical doctor in charge of visiting the Lazzarettos, examining all deaths in town that could be related to the plague and providing exptertise to the officers on how to deal efficiently with the plague.

The seat of the Health Office overllooked by the water front that once was the main port in town. St. Mark’s bell tower was used as an observation post to look as far as possible and to keep track of any ship entering the port. The observers could send an patrol boat with health officers on board to pick the captain of the newly arrived ship and bring him to the office for debriefing before escorting him and his ship to the quarantine island for the compulsory 40 days insulation. 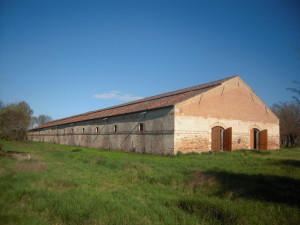 The Lazzaretto Nuovo was abandoned as the main quarantine station in 1782. The buildings were centuries old and in need of continous restaurations, the marsh around was growing making the access of large ships more difficult as goods and people had to be ferried on smaller boats. The last Lazzaretto was built at a more convenient location then in the island of Poveglia just next to the main access into the lagoon by the deep channel of Malamocco. It was a temporary station until the Austrians transformed in a steady quarantine one in 1814 and in use until 1866. 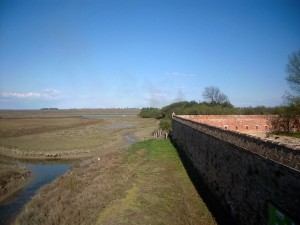 The Lazaretto Nuovo was transormed in a military garrison during the Austrian rule in the 19th century. A wall was built all round the premises and the large central warehouse was trasformed into a gun powder and weapons depot. Its military function will continue until 1975 to became a public property one year later.
The area was already in full decay, the buildings were collapsed and the land area covered by thick vegetation. It was the hard work of the Ekos Club Volunteers Association to fully recover the Lazzaretto Nuovo up to when it was open again to the public for the first archeological summer camps in 1987. The Lazzaretto Nuovo is today a multipurpose center ranging from museum and exhibit area, archeological and research center, summer camp for kids and public park. But the island is also part of the natural environment of the lagoon, you can walk around the island at a short distance of mudflats and enjoy great views on the vast water surface. 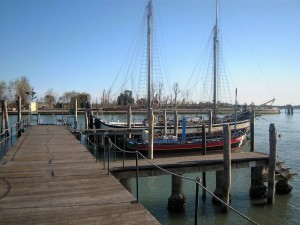 The island is open for guided tours and from April to October at 09.45am and 4.30pm upon arrival of the waterbus line 13 leaving from the Fondamenta Nuove. Know more at this link http://www.lazzarettonuovo.com/home-2/