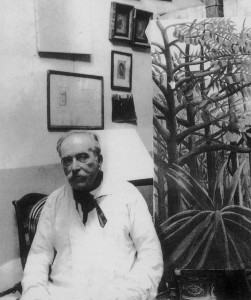 open daily: from 9am to 7pm Sunday to Thursday – 9am to 8pm on Friday and Saturday.

Henri Rousseau (1844 – 1910) was a post-impressionist French painter whose style was described as naive, primitive and ingenous in his days although he can be assumed as the emblem of the anti-impressionist counterrevolution defined as the return to the pure values of drawing, decoration and color and the rigorous achievement of fantasy over reality. He was then a forerunner of Magic Realism and Surrealism without having any awareness of this. By the end of his life and beyond, Matisse, Braque, Picasso, Cocteau, Cubists and Dadaists noticed that Rousseau expressed the same ‘new’ language in painting they were looking for.

On the obituary announcing his death in 1910 and published in the ‘Chronique des Arts’ it was written: ‘’The painter Herny Rousseau died in Paris last week. He was a retired Duty officer who regularly sent to the Salon des Indépendants and the Salon d’Automne  his pictures whose ingenous composition brought him a certain recognition’’. These few lines summarize with a great degree of accuracy the career of Rousseau as a painter and how his work was seen by his contemporaries. 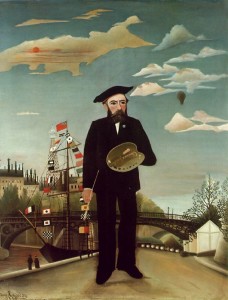 His nickname was the Le Douanier (Custom Officer) because he worked as an officer at some of the duty toll stations located at the main gates of Paris. To pass the long idle hours in between arrivals, Rousseau decided to became a self-instructed painter and this is the reason why most of his works shows a lack of both perspective and 3D rendering of objects and a very little arrangement of the picture plane. Although the semplicity in painting composition, the vivid colors and the fairy-tale and surrealistic ambiances of his works made the ‘ingenious’ painter an appreciated artist by the leading figures of the new artistic trends in the early 20th century like Guillame Apollinaire, Pablo Picasso, Robert Delaunay, Trsitan Tzara and Salvador Dali.

His official debut as a painter was in 1885 at the Salon des Artistes Français but his works had a bad review by the critics. One comment was very harsh about his lost work ‘Italian Dance’: ‘’ A work of a ten years old child who wanted to paint some ‘little men’ figures’’. Infantilism is the definition that will be used to describe Rousseau’s painting at this stage.

After the rejection of Georges Seurat’s work at the 1884 Salon, he and other artists including Redon, Signac and Toulouse-Lautrec founded the Salon des Indépendants whitout an official jury where only the public opinion could state the exhibited works. The aim of this new venue was then no to express any prejudice to artists and their paintings.

The new Salon was the right place for Le Douanier to show his personal and innovative style. In 1886 he presented ‘Carnival Evening’ the first painting of a series showing small figures wandering in woods. His participation to all the following Salons gave him the opportunity to change his status from amateur painter into a professional. 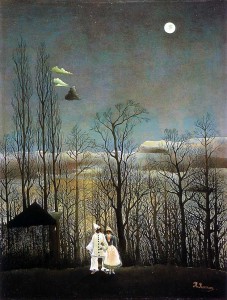 Despite all his efforts to be appreciated as a true artist, his style was still considered controversial and at the Salon of 1888 he received sarcastic comments again pointing out his childish way of painting mosty related to the lack of perspective.

In 1890 he presented ‘Self-portrait and Lanscape’ one of his greatest works. In this painting he aknwoledges his status as a painter and a French one with the Tour Eiffel in the background as the greatest feature of the 1889 Paris Expo. Other paintings after this ‘Self-potrait’ will include in the backgroung features of a modern city and a modern world like in the ‘View of the Sévres bridge’ where an airplane and montgolfiers can be seen fliying in the sky.

Antoher turning point in his style took place at the 1891 Salon with the work titled ‘Surprised’, the first painting where a luxuriant vegetation occupies the entire surface of the canvas. And this new genre of exotic jungles will mark a great part of his production and the one for which Rousseau will be widely known. 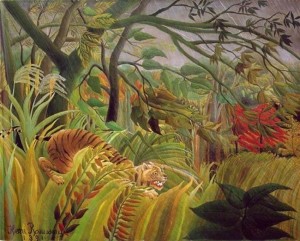 In 1893 he retired from the Custom office to became a full time independent painter.

After the hard years of his debut , Rousseau is getting now a certain degree of celebrity but without making much money. He lead his life as a real bohèmienne and to survive he had to accept during his entire life small jobs as a decorator, painting private portraits for little money and teaching violin, drawing and painting.

From 1904 onwards Rousseau will focus mainly on paintings with ‘Jungle’ settings where wild animals fight but in a rather fantastic way, in the same painting you can see plants and animals of diverse provenance. 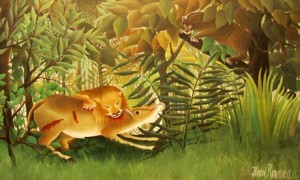 The 1905 painting ‘The Hungry Lion Throws Itself on the Antelope’ epitomizes this trend he’ll pursue until his death. In 1906 he met Robert Delaunay who became an admirer of his work and brought him to meet the German art merchant Wilhelm Uhde. He will organize the first exhibit entirely dedicated to Rousseau in 1911 one year after his death.

Another admirer of the French painter in the last years of his life was Guillame Apollinaire who start to appreciate his work after he saw the painting called ‘The Dream’ exhbited at the 1910 Salon des Independants. 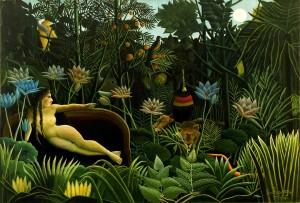 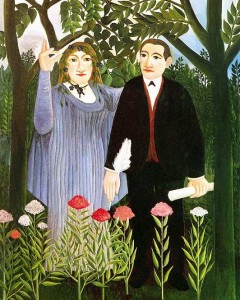 Apollinaire introduced Rousseau to many artists and intellectuals of the time granting him some fame.  The art merchant Amborise Vollard who was buying at that time works of Picasso was one of them. Rousseau started then to sell his works as never before but still he never got rich.

In this last years of his life Rousseau begun organizing what he called ‘familiar and artistic’ events inviting at his place a number of people like Apollinaire, Delaunay, Uhde, Picasso, Brancusi an others. Picasso started to buy his works, the first one bought for only 5 francs from a junk-dealer called ‘Portrait of a woman’ from 1895. To celebrate the purchase and the painter, Picasso organized a banquet celebrated later as an event by the members of the avant-garde in Paris. 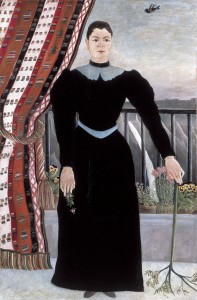 But despite his newly achieved popularity Rousseau will never get to stardom, his reputatiion was undermined when he was sentenced for taking part in a bank fraud. Rousseau died on September 2, 1910 due to the consequences of a bad cured injure that turned into gangrene. 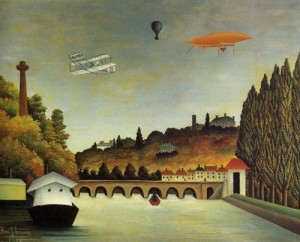