The meaning of Carnival and its roots 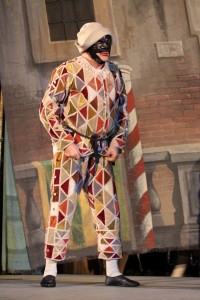 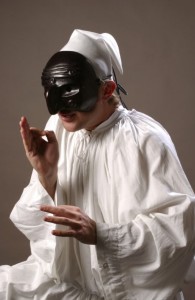 The origin of Carnival as a popular feast in Christian societies is rooted in paganism.

Its meaning was to celebrate a break in the everyday order, balance and duties of a society opening an ‘interregnum’ where custom rules and class differences were dissolved.

To accomplish this goal people participated in banquets and feasts where moral bonds were loosen to the extreme involving all members of sociey without distinction. The ultimate goal was to strenghten those social rules and obligations that were left aside during the intermission.

Infact, when the time of joyful and extreme gayety had passed, all went back to normal restoring the usual social mores and inequality among classes.

The most popular and well known of such an event at the time of Ancient Rome was the festival called Saturnalia celebrated between December 17th and 23rd of each year and dedicated to god Saturn. The event marked the end of the old year and the beginning of the new one at the time of winter solstice which was the main turning point in the calendar. Saturn was the Roman god presiding over the agricolture, the cicles of nature and agricultural bounty. 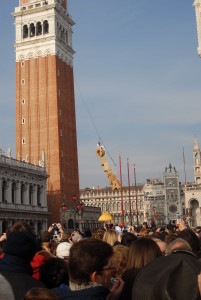 During the days of Saturnalia Ancient Romans participated in great public events like banquets and sacrifices and also in private bacchanal-like parties. During official events participants used to greet each other by saying ‘I Saturnalia’ and exchange presents.

Dominant social rules and class segregation were abandoned, slaves were freed temporary and they could eat at the same table of masters enjoying themselves. Slaves and servants could also enjoy a pretense of disrespect and could talk openly. However all knew this was just a momentary suspension of common laws as they will be reinstated after the feast was over.

Gambling and dice-playing normally forbidden were permitted for all including slaves. A master of ceremonies was appointed, he will wear a mask and all he said and commanded had to be obeyed by his ‘followers’. The ultimate goal of his orders was to rule an absurd a caothic world.

Somehow this temporary subversion of rules was kept alive in Christian societies during centuries up to the present. The word Carnival or Carnevale in Italian derives from ‘carne levare’ or ‘skip the meat’. After Mardì Gras (Fat Tuesday) and Ash Wednesday which marked the end of the carnival, Christian societies entered the customary 40 days of Lent a period of restrain during which it is required to maintain a frugal diet giving up then meat.

The official celebration of Fat Thursday (Jeudi Gras) in Venice began in 1162 as a way to celebrate a military victory. The city’s leader, duke Vitale Michiel, defeated a feudal landlord and archbishop of the city of Aquileia who was threatening the nearby city of Venice.

As a sign of Venice’s victory, the prelate was obliged to deliver each year to the victorious city one bull and twelve pigs representing himself and his allies. The animals were brought into a symbolic trial in the piazzetta San Marco and after being sentenced they were slaughtered and butchered. Venetian nobles shared the meat after the event.

This feast called Berlingaccio was held until 1525 when it was finally considered unsuitable by Venetian officials. 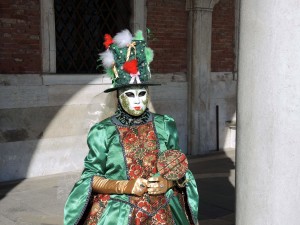 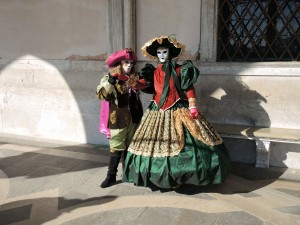 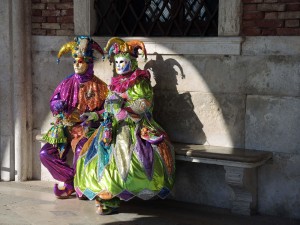 A new way to celebrate Jeudi Gras was introduced in 1550 to remain unchanged until the fall of Venice in 1779. The main features were:

– the so called ‘fly of the turk’. An acrobat was tied up on a rope and being slowly raised to the top of the bell tower. While he was descending he played as an angel moving the fake wings of his costume

– a great firework as the grand finale.

St. Mark’s square was the center and focus of the Carnival. An heterogeneous crowd will occupy the square at any hour during the week of Carnival ready to witness the many attractions that were held there. Tumblers, funambolists, astrologists, chiromancers, animal dance shows with dogs and monkeys, puppeteers all that could take place in the square at given times.

Another tipical Venetian feature during Carnival for which Venice become famous was the use of masks. Keeping in mind that the main goal of Carnival was to dissolve social differences of class and status among citizens temporary, the use of maks was essential. By hiding their likeness behind a mask nobles, rich, poors and commoners were all equal as no one could recognize each other and his social status. 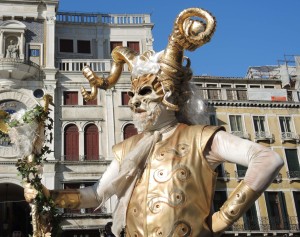 corded news about the use of masks in Venice can be dated back to 14th century, but the combined use of a mask with a costume began in the 15th century to became dominant in the 16th century. The main vehicle for the diffusion of costumes and masks together was the so called Commedia dell’Arte to be considered the first step of modern theatre.

In the beginning there were small to medium size groups of non professional actors who travelled from one city to another at the time of major events attracting crowds and Carnival was the most important event. Each one of this group of actors will represent very simple plots speaking the dialect of the bystanders and using mimic as the main way of acting so they could be easily understood by a non sophisticated audience.
In such a context the use of masks became preeminent. An actor will play different characters and each team of actors will develop its own favourite one defined by a mask and a costume making them easily recognizable by the audiences.
This process brought to life a large number of characters, just to mention a few of the most famous in Italy: Pulcinella or Punch, Arlecchino or Arlequin, Il Capitano or the Captain, Colombina, dottor Balanzone.

The tipical Venetian character was Pantalone and aged merchant with bad temperament who tries to engage in a love affair with younger women.

Besides the customes and masks derived from popular theatre there were many more created by the people’s fantasy up to 70 at least. Some of the most extravagnt were a fake horse, a fake donkey head, a satire, a fake chained bear, adult men dressed and acting as women or young effeminate boys, and fake beggars showing deformities, ugliness and simulated sickness.
If you were a visitor to Venice back then you could have seen large companies of people masked in the most bizarre way marching together through the city becoming a show in itself. 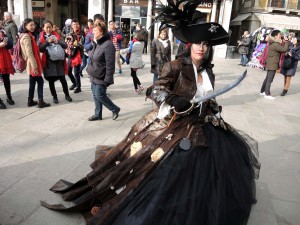 The golden age of the Venetian Carnival was the 18th century well known all over Europe and attracting large numbers of visitors. The event started on Dicember 26 to last until Mardi Gras which means an average of 2 to 3 months according to the changeable date of Easter.
There was also a shorter Carnival in May at the time of the feast of the Ascension of the Lord when a big fair was organized in St. Mark square. This ‘smaller’ Carnival lasted two weeks and brought into the city  thousands of foreigners as it was much warmer in May and with a better climate than in January or in February.

In the 18th century Venice was already a long time first class international destination for the affluent Europeans and a must-go place at the time of Carnival when it become a city offering to visitors the largest selection of entertainement ever seen in the Europe of its time.
There were a large variety of events taking place in the streets. But the private and exclusive parties organized by the nobles in their luxurious palaces that could last all nite long were very coveted by wealthy foreigners. 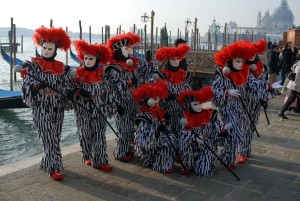 atre play and opera performances were also two very important events that attracted large numbers of visitors to Venice during Carnival.
The opening of the theatre season was set on October 1st and from that date people could already wear masks being mandatory for nobles attending theatrical plays or operas.
There were seven theaters in such a small city of which five were dedicated to opera and two for theatrical plays. The offer was overwhelming and visitors could pick one different show every night. The rent of a box in one or more theaters was a status symbol for Venetian nobles and a sort of small private apartment to which they could get access at any time.

Another place very much frequented during carnival was the casino or gambling house. The use of masks was mandatory in the official casino. In Venice it was legal to ga 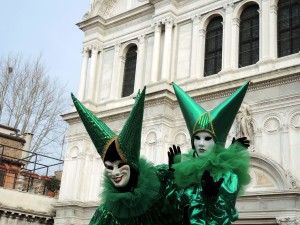 mble with stakes in only one State owned house very close to St. Mark’ called Ridotto square but the Venetians of the time were addicted to gambling. Nobles rented small apartments throughout the city called casini where they could practice gambling at any time in discretion. This is how the word casino become later synonym of a place where to bet or gamble.
Venice was well prepared in the 18th century to welcome tourism. It offered a wide variety of lodging ranging from a cheap room in a local inn to first class hotels or sumptuosly decorated rooms in a private palace.
There was a large number of shops in town almost 6000 to cater mainly the tourists and most remained open till late at night. During Carnival you could go shopping at midnite if you wished.
Last but not least we have to mention also the cafeterias, a popular gathering place in the 18th century specially during Carnival they were accessible places where to see and being seen. Trying to limit the growing number of cafeterias the final amount was fixed at 209.

The end of this crescendo of carnival craziness arrived in May 1797 when the French troops led by a young commander called Napoleon entered the city. Venetian Carnival became then just a memory of the past of which we still talk in amazement considering the scale 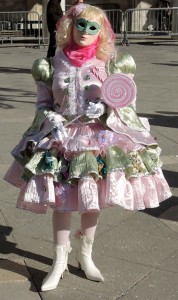 of the event in its heydays.

Present Venetian Carnival as a public event was brought back to life in 1979 although without reaching the heights of the previous one.
The beginning is now on a Saturday with the most beautiful parade, the Festa delle Marie or the Carnival Damsels parade of which one will be elected Queen of Carnival.
Next day, Sunday, is the official beginning of Carnival: the square is packd with people waiting noon when a young lady in her angel costume start her ‘flying’ descent tied up on a rope from the top of the bell tower.
Modern carnival in Venice lasts an average of 11 days, the peaks being Fat Thursday and Tuesday the last day of the event known as Mardi Gras.
Every year there are many daily events and happenings taking place in several areas in town, you shoud just see the programme on the link further down.